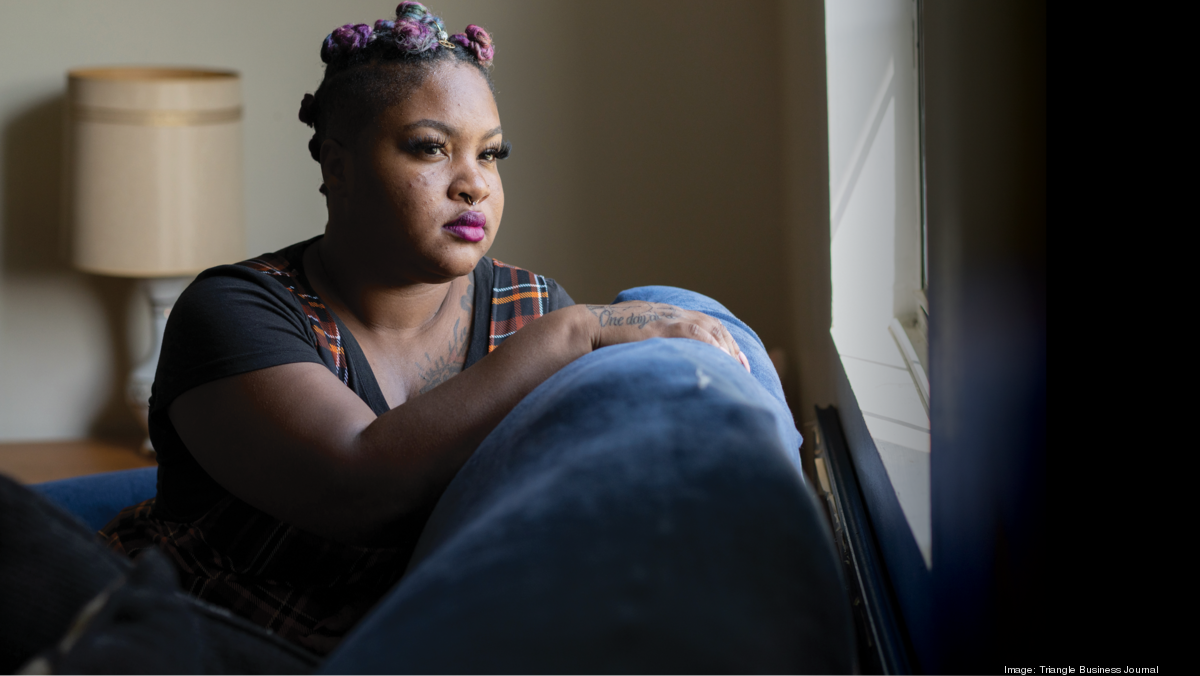 The restaurant industry is experiencing a hiring need it has not seen since the start of the pandemic, but in yet another challenge for that battered part of the economy, finding people to fill jobs hasn’t been easy.

Some former food service workers such as Durham resident Holly McCoy are no longer clamoring for the positions.

The 30-year-old single mother of three went back to school and has set her sights on being a community health worker. For McCoy, the new career path will allow for safe working conditions and for her to spend more time with her family while earning a living wage.

If it were not for the pandemic, she would not have considered looking for work outside of fast food or retail. But after Covid hit, she spent the last year taking free courses at Durham Technical Community College and finding stable housing for her family.

“I’ve always wanted to go to school but I had my first child at 18 years old so I couldn’t,” McCoy said. “So I decided to get certifications in something that will allow me to work whether there’s a pandemic or not. I’ll still be needed. I’ll have a career. This is something that I’ve been waiting for my whole life. The pandemic has been bad, but now I feel empowered.”

More than a year after the coronavirus shook the U.S., the economy is slowly rebounding and restaurants are moving toward recovery.

Food and dining places reached $61.2 billion in sales in March, the highest in two years, according to the U.S. Census Bureau.

The labor market is improving. In March, the United States added 916,000 jobs, according to a monthly Bureau of Labor Statistics report. The leisure and hospitality industry had the most gains, adding 280,000 positions, including 176,000 in the restaurant field, the most since the start of the pandemic.

Still, employment in leisure and hospitality is down 18.5 percent since February 2020.

But returning to pre-pandemic performance hinges on whether restaurants can entice workers to come back.

And people like McCoy may be forcing the restaurant industry to re-examine its methods of hiring and retaining employees in the traditionally high-stress, low-paying jobs — a challenge that comes after a difficult year.

Nearly everyone in the industry remembers March 17, 2020.

That’s when Gov. Roy Cooper issued an executive order that suspended indoor service at bars and restaurants. Restaurants that could not pivot for takeout or outdoor service temporarily shut down — and some never reopened their doors.

Overwhelming demand led to delays in processing the applications and paying out funds.

That’s when the North Carolina Restaurant and Lodging Association launched the N.C. Restaurant Workers Relief Fund to give $500 in assistance for qualified restaurant and hotel workers.

The fund received over 15,000 applications and raised about $1.3 million, said NCRLA President and CEO Lynn Minges.

About 103,000 workers in the industries were displaced in North Carolina with urban areas impacted the most as professionals  stopped commuting to their offices and spending lunch money, she said.

Many businesses that resumed operations rehired and paid their staff with loans through the U.S. Small Business Administration’s Paycheck Protection Program.

The gradual easing of Covid restrictions and a decrease in pandemic-related deaths have prompted dining establishments to consider bringing on more help.

“We’re feeling encouraged that restaurants can open with 75 percent capacity,” Minges said. “That, coupled with the return of outdoor dining, warmer weather and longer days are giving businesses and consumers a sense of confidence. Restaurateurs are working feverishly to hire people to come back, but many have gone on to find employment in other fields.”

Moving forward, the hospitality and restaurant industries need help redeveloping their workforces with updated skill-sets, including developing menus and pricing structures as well being more technology savvy, she said.

Minges said the restaurant workers who stayed feel positive about returning to work and getting vaccinated now that the worst part of pandemic may be over.

Low wages paired with the fear of contracting the coronavirus have deterred workers from applying, even as long-term employment — at least six months without work — lingers. The minimum wage is $7.25 an hour. Tipped employees must get at least $2.13, as long as they earn enough to make up for the difference between the paid wage and minimum wage, according to state laws.

In food services, the average hourly pay is about $12.45, according to the most recent Bureau of Labor Statistics report.

In recent months, restaurant workers have weighed the benefits of working for minimum wage or low pay versus leaving the industry altogether. Others are using unemployment benefits and stimulus checks before making a move.

People in the service sectors who have been affected by Covid are among those who have sought help to pay bills.

They have turned to programs created in response to the pandemic, including the Housing Opportunities and Prevention of Evictions Program. The statewide program was launched Oct. 15 to help low- and moderate-income renters with rent and utility costs. The N.C. Office of Recovery and Resiliency administers the program, which initially was funded with $117 million from the Coronavirus Aid, Relief and Economic Security Act.

The HOPE Program is quickly reaching its funding limit after receiving about 43,000 eligible applications in three weeks, said Laura Hogshead, the CEO of NCORR. Delays resulted as people who never thought they would need the program found themselves applying, Hogshead said.

The undertaking was larger than the agency anticipated but it has tried to adapt, she explains.

“I’m incredibly proud of the program,” Hogshead said. “It was an unprecedented effort to stand up a program that never existed before last fall. NCORR has lots of experience spending federal money compliantly and quickly. When we volunteered for this, we thought it was going to be a sprint, but this has evidently become a marathon. We’ve had to make policy changes and adjustments to our staff and plans to make sure we can handle the next round of funding.”

NCORR initially planned to coordinate payments to landlords with 20 nonprofit partners throughout the state, but they were not set up to handle the volume, she said. Now, NCORR oversees the transactions.

“Since we took back that function at the beginning of March, we have made tremendous progress in getting the payments out the door,” Hogshead said. “It’s easier to do it through the state than through the nonprofits that have tight cashflow. We’re just about done with payments for the first round of the program.”

To date, more than $133.4 million has gone toward over 56,000 rent and utilities awards for more than 36,000 eligible renters, according to NCORR. The HOPE program paid $132.7 million to landlords and utility companies across the state.

A second application period for low-income renters who have gone through hardship because of the pandemic opened May 18.

In the next phase, the agency will administer $546 million in federal pandemic relief funds. A portion of that will go to the state and the other will be for 12 entitlement communities, Hogshead said. Each community will operate their own rental assistance program. NCORR will run the state’s portion, which will largely go to rural and suburban areas.

A third round of funding is in the works, she said.

Apartment property management companies are already seeing a difference as the funds are being paid to landlords, said Drucker & Falk Managing Director Kellie Falk, who oversees management of more than 30,000 apartments apartments from Indiana to Florida and including North Carolina.

Last year, the Virginia-based real estate company prepared for the worst before the rental assistance programs were launched, Falk said. She said the company worked with tenants who lost work because of Covid by offering payment plans and waiving late fees.

“Raleigh was not as bad as places like Tampa and other tourist towns,” Falk said. “But we still had problems. For every apartment community here, there were two to 10 people who at some point lost their jobs and were not able to pay rent.”

The Centers for Disease Control and Prevention recently extended an eviction moratorium through June 30 to provide additional protection outside the CARES Act. Evictions have been halted, but the tenants still owe the back rent.

“Nobody can afford to pay six or seven months of rent,” Falk said. “I don’t know that anyone really thought it through. We care for these people but landlords have bills to pay. The good news is that when stimulus checks came out, many people paid their rent.”

On May 5, a federal judge threw out the decision, saying the public health agency acted outside of its power.

At the time, U.S. District Judge Dabney Friedrich put her ruling on hold, but on May 14 she agreed to further delay it and leave the moratorium in place.

Partaledis said delinquency is about 2.6 percent compared to about 10 percent to 15 percent before funding went through.

Restaurants are optimistic as more people are getting vaccinated and pent-up demand pushes consumers to spend. Also, the return of sporting events, concerts and other large gatherings is on the horizon.

But the industry still faces two big issues that were only highlighted by the pandemic: low wages and high turnover.

Additionally, the pandemic may have emphasized the need for low-wage workers such as McCoy to reconsider their job prospects to set themselves up for success in the long run, resulting in a waning interest in open positions even as restaurants offer pay increases and signing bonuses.

The lack of job recovery paired with the accelerated use of technology could pose major threats to those workers who decide to remain in the industry, according to a McKinsey & Company report.

“Going forward,” the report states, “more than half of displaced low-wage workers may need to shift to occupations in higher wage brackets and requiring different skills to remain employed.”